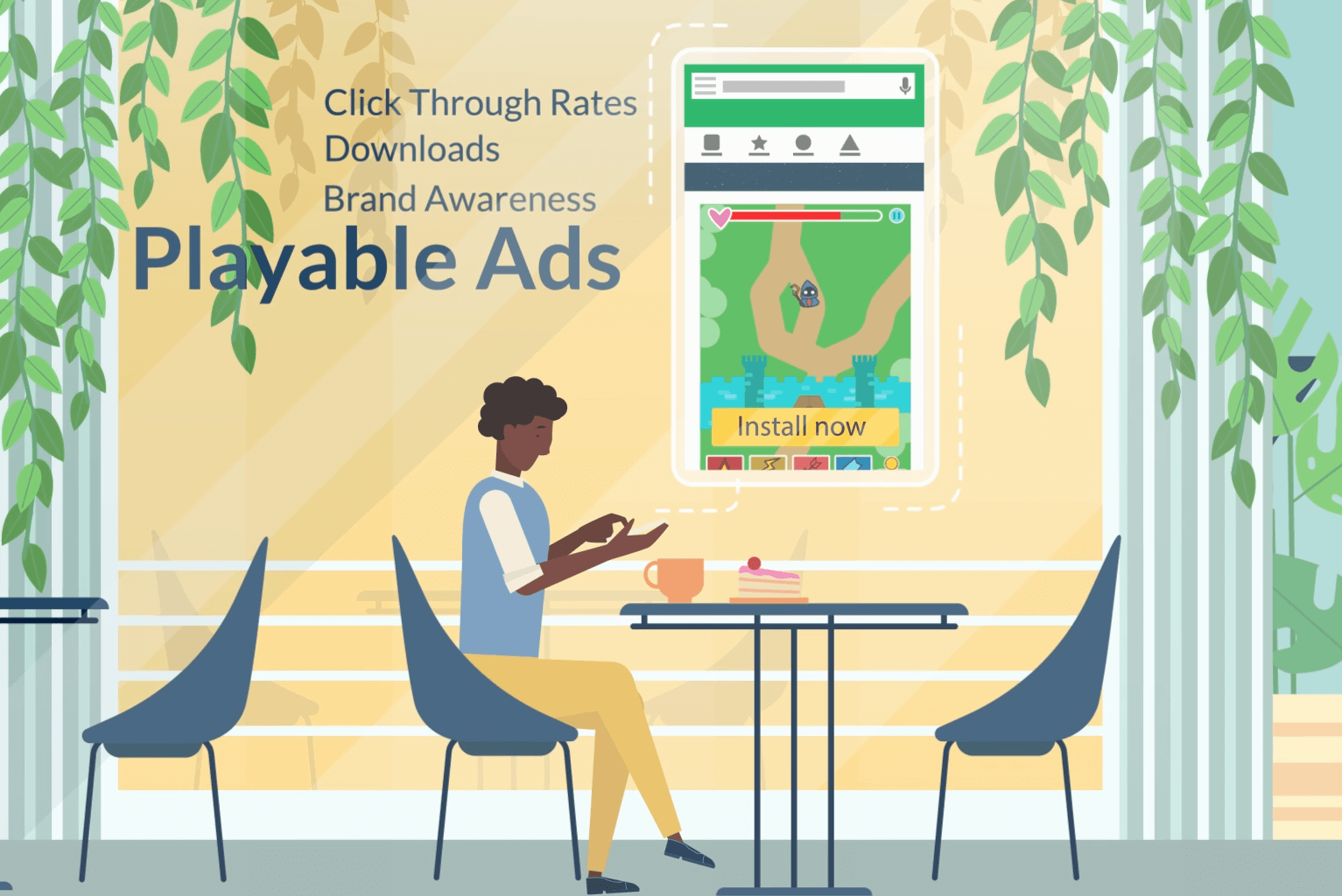 Online marketing, or as some would refer to as digital advertising, has been a part of the internet as more and more businesses go online to feature their brands. In 2018, about $49.5 billion were earned in digital ads based on the report done by the Interactive Advertising Bureau (IAB). 63% of the total revenue that year belonged to mobile ads.

With this high volume of online ad spending, we begin to wonder if traditional ad formats are still the way to go. Unfortunately, no. The market for mobile games and apps has shifted towards a more engaging approach of advertising due to intense competition and declining human attention span. In this kind of environment, a new ad format has taken over the world—playable ads.

Our Definition of Playable Ads

Playable ads are mini-games designed for users to try out an app without prior installation. These stand-alone miniature apps provide a brief customer experience that captures the essence of a brand. We help brands and advertisers build playable ads for both gaming and non-gaming apps as part of their user acquisition (UA) strategies. 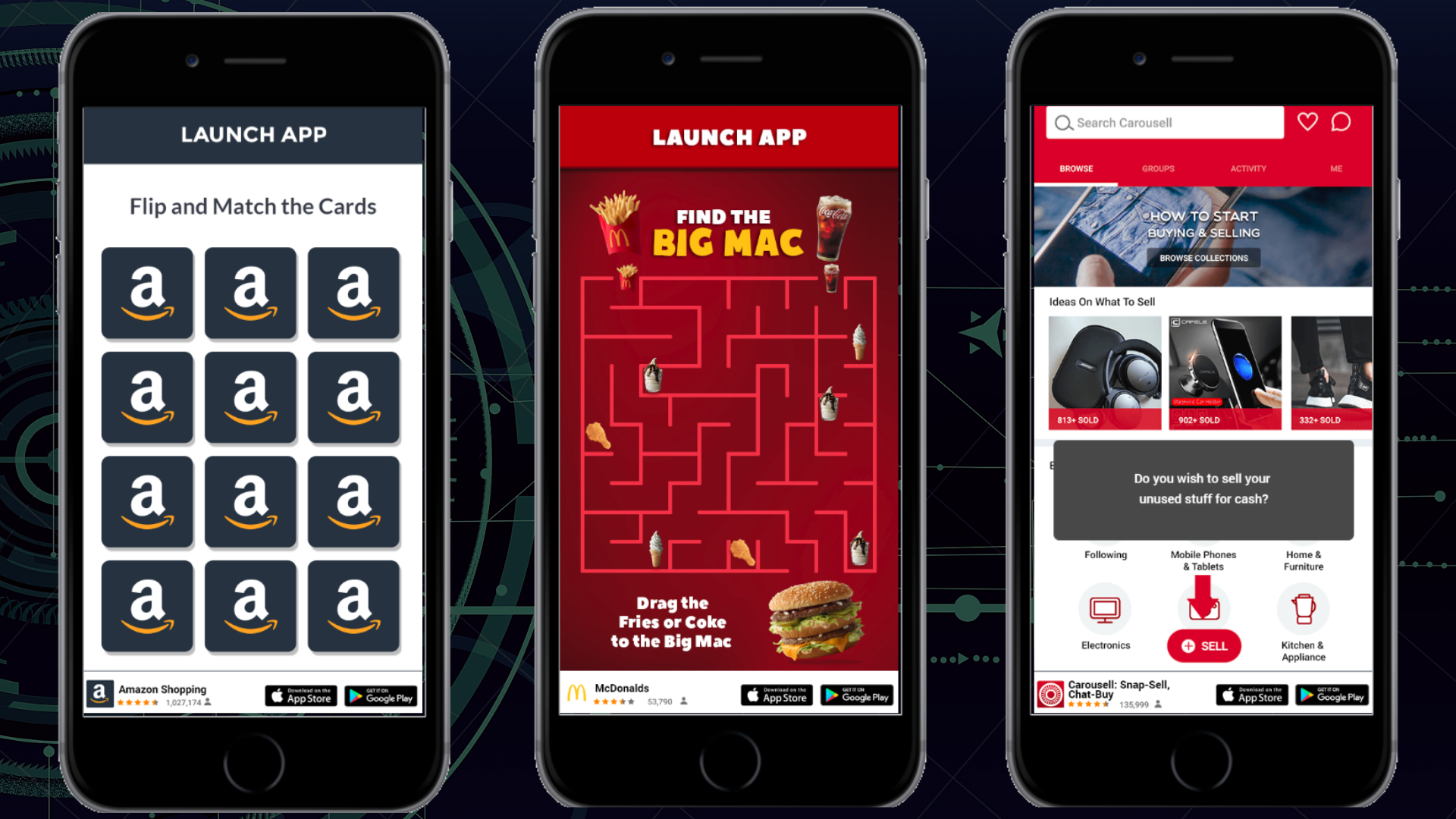 Note: All numbers are rounded off and normalized.

Table 1 showcases our client’s first-month performance on three major platforms, namely: Facebook, Google, and Unity Ads. Out of the 2.12 million impressions on Facebook, there were 50,000 clicks that yielded 8,100 installs. That’s a CTR of 2.36% and a CVR of 16.20%. 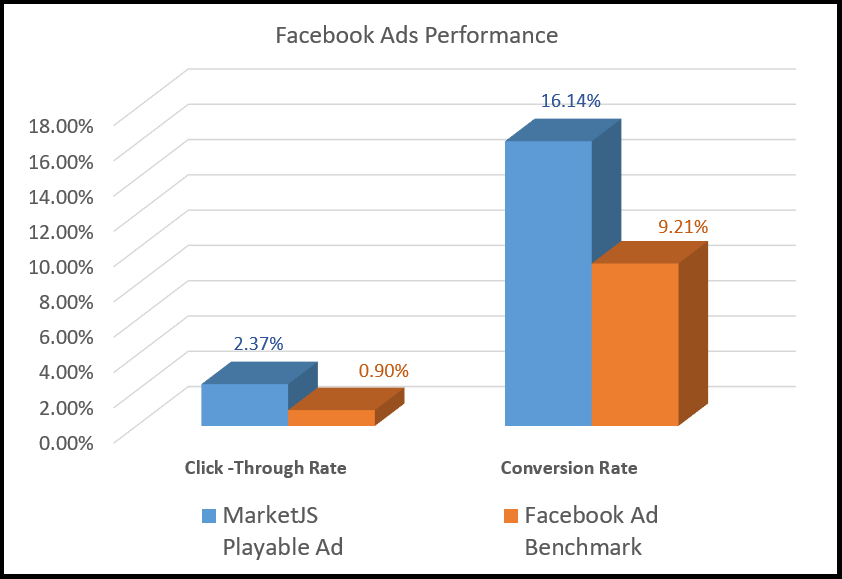 Here's a glimpse of how effective playable ads are in terms of value. Our client from the example above reported that their Facebook campaign had an effective cost per mile (eCPM) of about $5. So in order for them to reach the 2.12 Million impressions, they had to spend around $10,600 on the ad platform.

To compute for the CPI, we divide their ad spend with the total installs from Facebook Ads (see Table 1). Our CPI for the Facebook ad is $1.31. That's better than the average CPI on Facebook, $1.80, giving a cost reduction of 27% on ad spend.

For more sophisticated clients, they track the playable ad’s performance via a funnel. From the moment the playable ad opens to the install action, and down to in-app purchases, the performance is tracked. One of our clients reported a 300% ROAS (Return on Ad Spend).

The key factor why playable ads work is because acquired players from these ads have already pre-screened themselves in being a customer or not. Once they choose your brand (i.e. download your apps or buy your products), there’s a high tendency that they’ll become quality customers. Viewers who enjoyed the playable ad will likely enjoy the brand as well.

The Hook, The Gameplay, and The Endcard

A successful playable ad is made up of three main components: the Hook, the Gameplay, and the End Card. 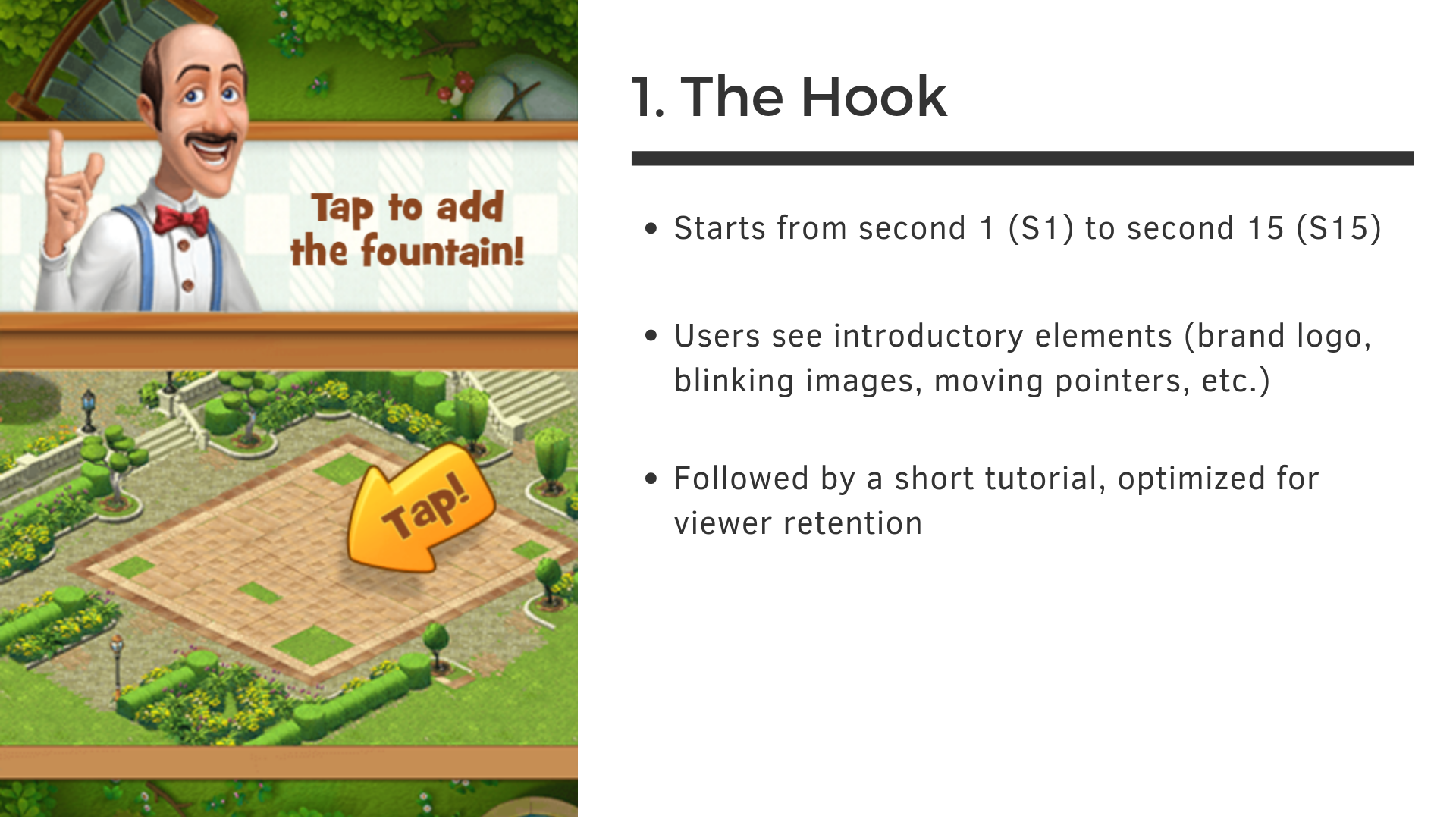 The Hook - The key to a playable ad’s success is its hook which captures the audience’s attention within the first 5 seconds. The user instantly gains control over the ad experience, instead of being the passive watcher. 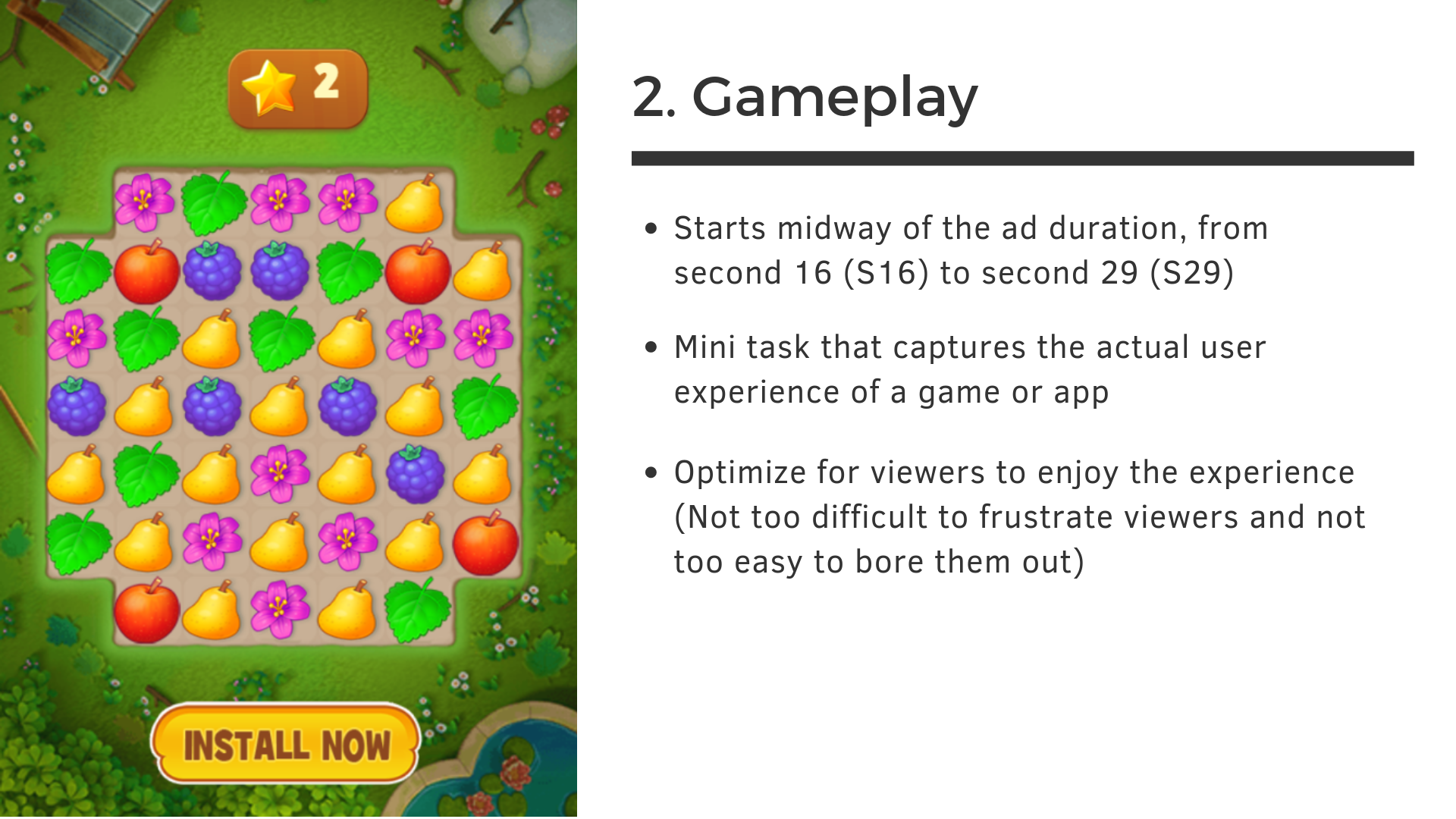 Gameplay - For games, the gameplay mirrors the actual game experience, distilled into a highly optimized version. For non-gaming apps, we gamify the experience by giving users the opportunity to try certain features of the app in a compact manner.

Most importantly, the gameplay must be well-balanced, not too easy but not too difficult. Finding the right combination ensures that users enjoy the gameplay and maintain interest to patronize the brand. 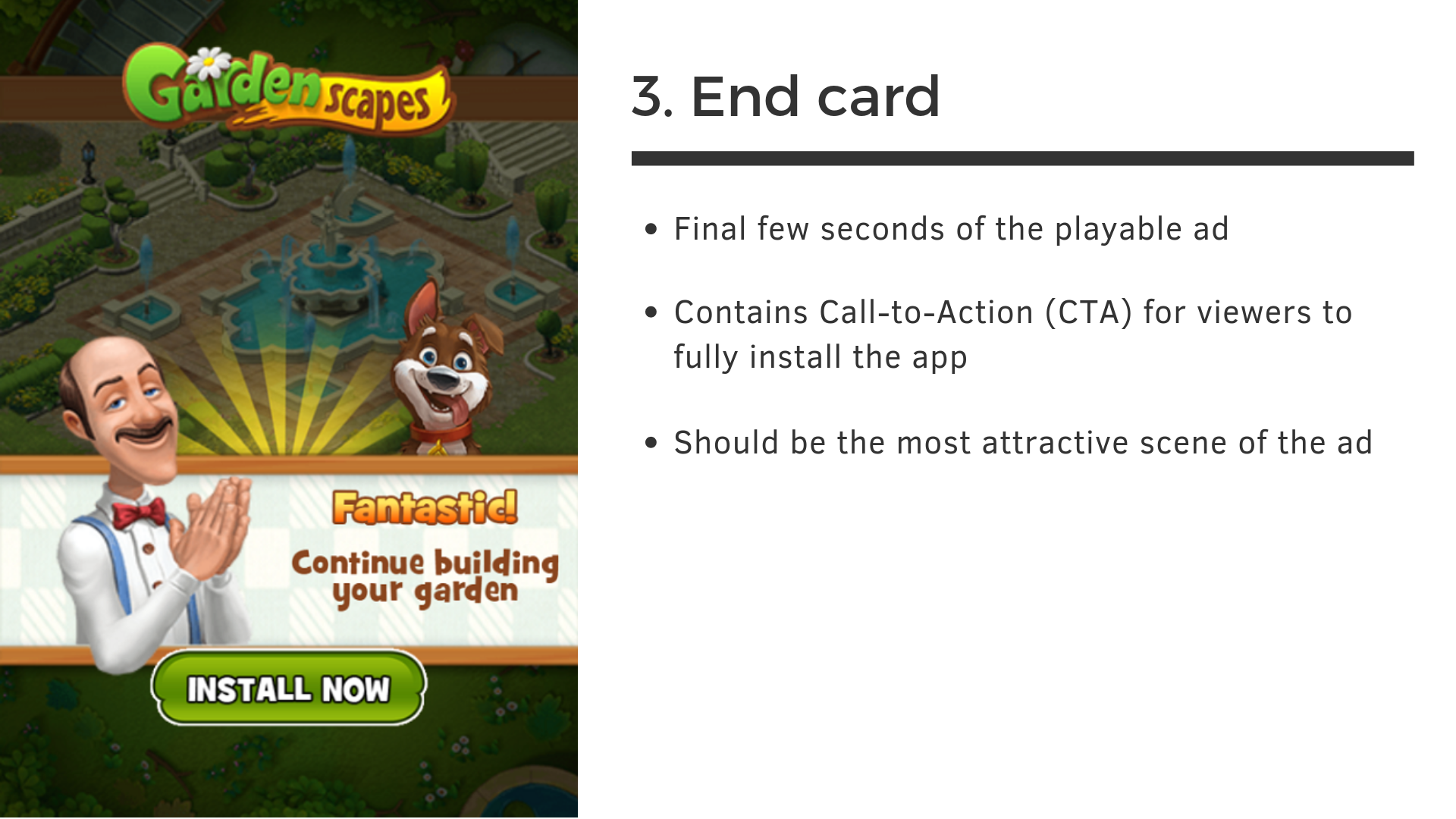 End Card - A screen which contains a Call-To-Action to download the app is generated. This is the last few seconds of interaction wherein the player is asked to perform the ultimate action: Installing the real app.

Here’s a short video of a playable ad for mobile devices.

Try our Gardenscapes playable ad here. Gardenscapes is a Top 10 Grossing Game on the Apple App Store and Google Play.

Playable ads have shown to provide unique benefits over other types of ads. Here are some of the main benefits gained from playable ads.

Here are some of the innovative ways that playable ads can be used to market your brand, regardless of which device is used.

Playable ads are highly viral forms of content for any brand. By adding the element of competition and prizes, these playable ads become more interesting to a wider set of audience. The added reach of playable ads and its potential to be frequently seen in social media can make previously successful promotion strategies become even more successful.

On the other hand, playable ads can also be used to engage and advertise to thousands of customers found using a common medium or service. By using playable ads, brands can generate awareness and interest at a reliable rate. The use of playable ads in popular mediums such as in-flight entertainment and rear seat entertainment secures a high number of audience that can engage with the ads.

Redirecting interest and traffic of customers over several competitors is a tough task even for popular brands. However, brands that seek to earn popularity can benefit from interactive choices integrated into their playable ads. Creative ads that stand out include a complete experience that guides viewers to the intended result—actual product recommendation and sales based on the viewer’s interest and needs. The interest generated by the brand from such experience builds its reputation and makes it more recognizable for potential customers.

Utilizing playable ads is the next big thing for online marketing as it solves the issue of ads being disruptive and unwanted by customers. Their game-like attributes provide more sales opportunities and synergy with existing marketing strategies.

Behind every successful marketing strategy is a well-executed plan that maximizes the use of technology. What you’ll need is a reliable partner that knows the ins and outs of how playable ads work. Contact us today!