We had such a blast teaming up again with Toyota to develop a new game. The multinational automotive manufacturer had previously partnered with us on a digital signage HTML5 game.

This latest project is for a Toyota car dealership event in North America. The game is called Toyota Park Puzzle, and is a reskin of a game we built using HTML5 technology. 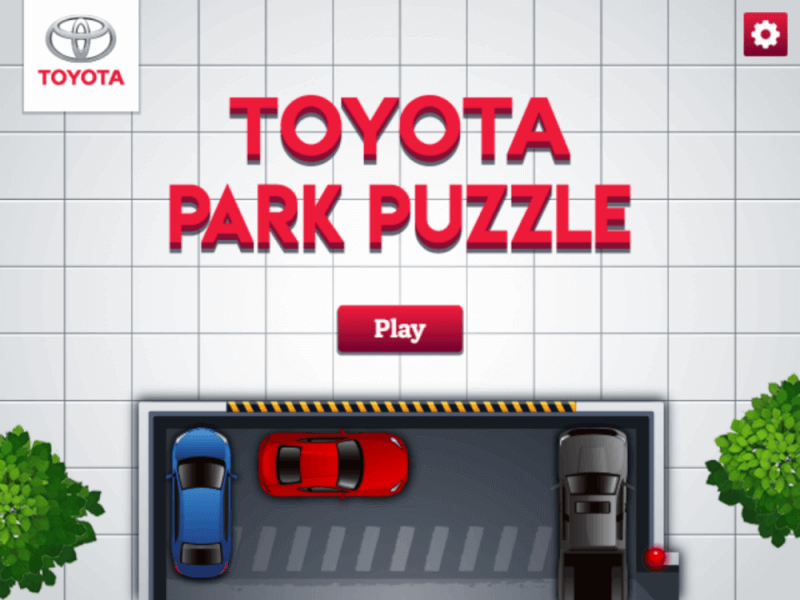 The game is a classic slide block puzzle. But instead of the usual wooden blocks, different Toyota cars are the ones that have to be moved around to solve the puzzle.

The objective of the game is to get the red car out of the parking lot. The player has to clear the red car’s path by manipulating several other cars that are blocking the way towards the exit.

A level has to be solved with the least number of moves to get rewarded with the highest number of stars. The puzzles get more and more difficult to solve as the game progresses.

The later stages really do get very challenging! But if you get stuck, you can activate hints to show you the solution.

Watch the video clip below to see the game in action:

Advances in HTML5 and JavaScript technology have given developers the tools needed to create impressive games. The nature of the HTML5 framework allows great quality games to be developed at lower costs and faster time frames.

For Toyota Park Puzzle, we reskinned our pre-existing game Unblock It. The process entails incorporating new elements to change the look and feel of the game while retaining its core mechanics.

All of our HTML5 games can be deployed on any device with a web browser, such as desktop and laptop computers, smartphones, tablets, and smart TVs.

HTML5 games are proving to be valuable and effective promotional tools for trade shows, exhibitions, and other events. Toyota is leading the way in using them to their full potential, partnering with us once again to develop a new game for another event.

With advancements in game development technology, it is truly an exciting time for brands and companies to adopt games for promotion and marketing. Games provide consumers with a fun and engaging activity, unlike the more traditional forms of advertising that people often skip.

If you are also interested in developing your own games for promotion or any other purpose, don’t hesitate to contact us.

If you're not convinced, listen to this podcast episode where we talk about how promotional (lead generation) games can generate potentially millions of dollars of unrealized revenue.