Film producers and distributors have been using the internet for the pre-release promotion of their movies for a long time. It’s now normal for official movie websites and social media marketing tactics to be launched months before a movie is even completed. However, the practice of developing an online game as promotional material for an upcoming movie is a relatively recent trend.

20th Century Fox is one of the movie studios leading the way in setting this trend of crafting fun and beautifully-designed games as part of the online marketing campaigns for their films. We are proud be involved in the development of a browser game for their latest animated film, Ice Age: Collision Course. The 3D animated movie is set to be released at the end of this month. It is the fifth installment in the Ice Age film series.

The movie follows the adventures of the Ice Age gang, Manny, Diego, and Sid, as they try to survive an asteroid apocalypse. The cataclysm is a result of a series of events that started with Scrat, the prehistoric squirrel who has been pursuing his acorn in vain since the very first movie came out.

Together with the great people from 20th Century Fox, our team decided to create a game that featured Scrat as the main character. Since he set in motion the events that would eventually lead to asteroids colliding with the planet, we thought that a game wherein he uses his acorn to hit planets would capture that premise quite well.

The finalized game is called Ice Age: Collision Course Planet Pool. Game players get to help Scrat virtually clear an asteroid field by sinking all the planets in the collision course order. It is a pool/billiard type game, with the acorn as the cue ball, and the nine planets as the billiard balls that have to be pocketed in a specific order.

The player uses the mouse to aim the acorn, and then sets how strong the shot will be by clicking and dragging a small round ship behind it. Releasing the mouse button launches the acorn. 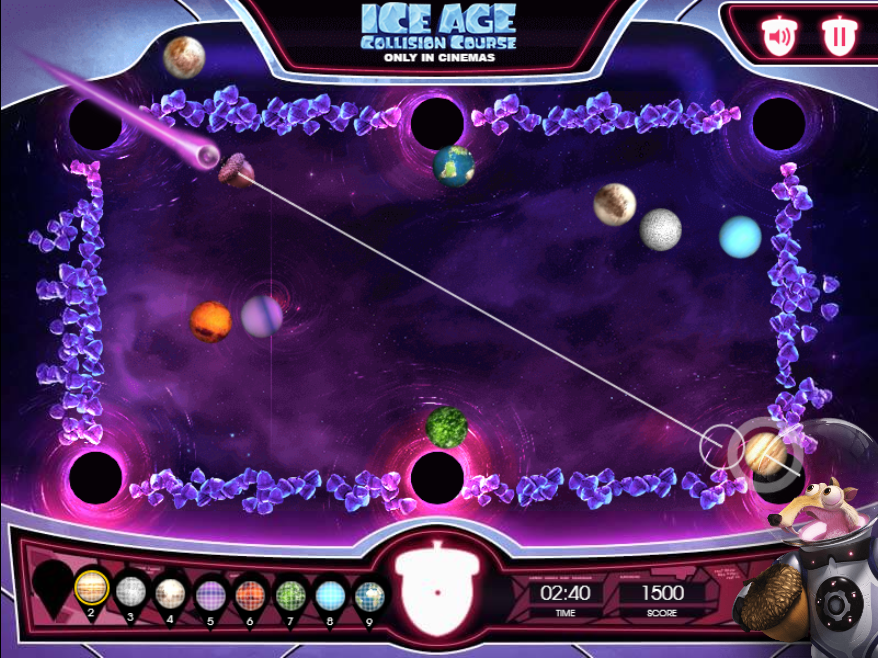 Planets should be hit in correct order from lowest to highest number.

Finishing the game without fouling (like hitting the wrong planet in the given order, or sinking the acorn) gives huge bonus points. Planet Earth is the 9-ball, and sinking it last will set up the next rack. A good way to set up the next rack without having to sink each planet one by one is by aiming to sink Earth by hitting it with the lowest numbered planet.

Aim at highlighted target planet with the help of guidelines, and sink it into the black holes.

Players experience an adrenaline rush as the time limit of four minutes runs out, in an effort to pocket more planets and up the high score. 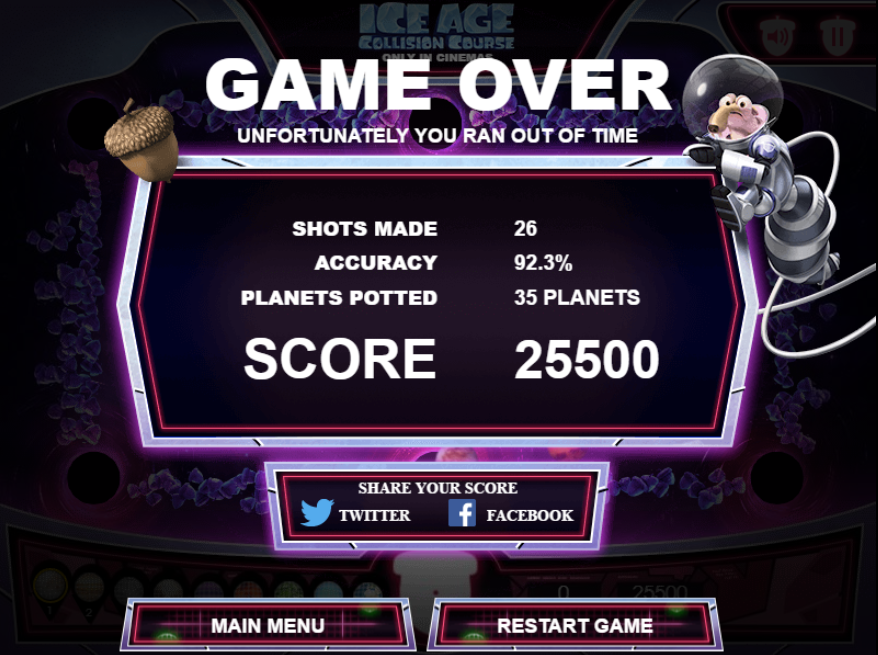 To meet the time and budget requirements of the film producers, we used the core mechanics of one of our pre-existing games, 9 Ball Pool. The game was reskinned almost completely to achieve the design and gameplay that the movie producers wanted. It retained the physics of the source game, so players still enjoy the authentic pool experience while being engaged in the movie universe.

Fans of the movie franchise will appreciate the new music and gorgeous artwork that were incorporated into the game. They also get to share their gaming experience with the built-in social media sharing feature of the game.

Game rebranding is increasingly being employed in the marketing campaigns for big and upcoming brands alike. It is a highly efficient way to create superb quality games without the exorbitant costs that otherwise come with developing games from scratch.

You also get the benefit of proven quality, since a ready-made game can instantly be evaluated, and has already gone through the rigors of quality testing.

HTML5 is the best technology available for creating stunning games that are easily deployed across different devices, whether it as a mobile phone, a tablet, a smart TV, or a digital display board. Since it is cross-platform, your games will work on any operating system.

Visitors to a movie website get an automatic interactive experience, since HTML5 games can be played without being redirected to an app store for download.

The development of this rebranded HTML5 game for 20th Century Fox is a good indication of where the future is headed for online ad campaigns of upcoming films. Indeed a movie website will now feel incomplete without interactive games for visitors to get engaged. Creating an HTML5 game by reskinning a ready-made game is a viable marketing strategy for movie producers.

Interested in rebranding one of our games? Feel free to contact us, and a member of our team will get in touch within 12 hours.